Msikwao is a young girl, early high school age who is seen at a river breastfeeding a child. The boy who sees her tells his father who gathers the village elders to interview her. She says she’s looking for her grandfather, and they question her about her past. It becomes apparent that she has not listened to her parents warnings, starting skipping school and ran away to go to the town. There she joined with other children who did not like school, and ended up pregnant (no explanation for how this happened.) Her life was hard and she decided to try to return to her parents. Her parents would not receive her and turned her away. She wandered about aimlessly until she had the idea to seek out her grandfather. Msikwao asks forgiveness of the village elders and goes with them to ask forgiveness of her parents. They forgive her and she returns home with her child but does not continue with school. This story shows us that Majuto ni mjukuu – regret comes too late.

Stories like this just seem so harsh to me, the idea that you have one chance and if you blow it, you are condemned to a life of poverty and regret, because you were warned and you didn’t listen so that’s just too bad. I can see how fear is powerful teaching tool, but it seems so final.

However, this story has a corollary. 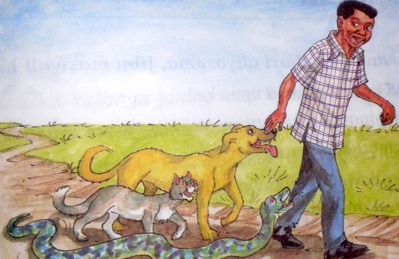 Tendawema is the much longed-for child of an ageing couple. Having struggled with infertility and the shame and insecurity that brings, they raise him with much love and care. He is a good child, a role model to the other children. When he grows up, he asks his father for some money to go out and start a business. His father gives him 50,000 shillings and he travels to seek his fortune. It goes well at first, but on one trip, the weather is not favourable with rain and wind followed by blinding heat. He meets three people along the way, one leading a dog, one a cat and one a snake. The owners are planning to kill the animals for various transgressions and Tendawema offers instead to buy the animals. However, to do so he uses all the money his father gave him. He returns home hoping to ask his father for more money but his father is angry at the waste and turns him away. Later on, his father’s rage subsides, but his son is already gone never to return. The father is in deep grief over this, but majuto ni mjukuu – regret comes too late.

Tendawema has clearly acted foolishly, but it is the father who is the greater fool, turning away the child who alleviated the shame and insecurity of childlessness for him and his wife, and losing relationship with his son. Better would have been to forgive his son’s foolishness.

Something that struck me about both stories was that they were essentially punitive. If people are motivated by carrots or sticks, the stick is well-favoured in Tanzania, including in these stories. One mistake can ruin things beyond repair. Maji ya kumwafika mayazoleki – water that has been spilled cannot be gathered up.

My impulses skew towards wanting to reduce the consequences of poor decisions, or seeing some kind of restoration. I’m frustrated that these stories are so final, that Msikwao is not sent back to school, that there is not some effort made to reunite with Tendawema. But these stories are not about how to bring life out of a bad situation; they’re about avoiding the situation in the first place. This warning exists right across the levels of society, from children to adults. While the story of Msikwao teaches that children must heed the warnings of their parents, Tendawema’s story teaches parents to be forbearing with their children even when they mess up.

Tagged as: A lesson about... Kiswahili methali proverbs stories