What Black Panther possibly teaches us about gender hierarchy and equality

I haven’t seen Black Panther yet. Though Dar has movie cinemas, we don’t have people to look after our kids so we can go! I’ve been following a bit of the coverage though, and was interested to see Trevor Noah make some casual comments about how gender hierarchy and equality […]

When I took a group of student leaders through DISC, I tried to contextualise it somewhat, but many of the questions played out very differently in Tanzania from how they would in Australia. For example, even the guy who was a super strong D ticked the box in the quiz that […]

More on hierarchy – from Tanzanian proverbs

In language class we have been concentrating on Tanzanian proverbs and sayings as there are many in common usage. We have noticed that many of them pertain to the issue of hierarchy. Lots of them are warnings to people who are nearer to the top, but they are not addressed […]

I’ve been trying to get my head around why Tanzanians might view some hierarchy as a good thing. Australians are deeply suspicious of hierarchy, often viewing it as inherently flawed, a system that inevitably leads to abuse of those at the bottom. Tanzanians do not share our pessimism about hierarchy, […]

My ’emotional life of Tanzanians’ theory, and animism

A while ago, I floated a theory about the emotional life of Tanzanians. It went something like this: the hierarchical nature of society in Tanzania means people do not get practice at identifying and expressing their emotions, because they are expected to repress them and obey those who are over […] 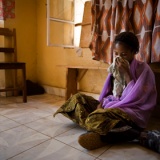 In the last post I suggested that Tanzanians do not necessarily view hierarchy as inherently abusive, in contrast to how I and many westerners think. So if hierarchy is not abusive, what is? How do you define abuse? Here I try to process some of the factors involved in this […]

A well-known egalitarian scholar once told me that the reason Africans read hierarchical gender roles in the Bible is because they don’t have the theological scholarship that we do, so we need to go and educate them. I smiled politely because this guy was significantly older than me, and ironically wasn’t […]