I learned a new word the other day: bi-dialectical. We’d been watching a show with Gillian Anderson in it, and wondering at why her British accent is so good. Turns out, because she lived between the US and the UK as a child, she has two accents in the same […]

My top tip for parenting through transition 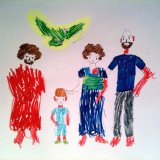 Our kids have been through so much transition in their lives, you’d think they’d be used to it. They’re not. In fact, they might even fear change more than most because they’ve done it so many times. They long for stability, and I long for stability for them. I do […]

We’d rather have a backyard than do craft

Over Advent I did a series of Facebook posts of some of the activities I did with my boys: making a nativity set, angel wings, a game with a star that they follow, a puppet show. I periodically put some of our craft and sensory activities on Facebook, and generally […]

A brief moment of respite for the little guy

Here’s a situation to break the heart of a mama of a TCK. These are beautiful pictures of Elliot with other Tanzanian children his age. What’s not to love? Let me tell you what I see when I look at these pictures. I see a child who is in his […]

The soundscape of ‘home’

Elliot calls our apartment in Dar es Salaam ‘the bat house’, because there’s a big colony of bats in the surrounding trees. From the balcony where we hang our washing, you can look directly at bats hanging in the tree only centimetres away, and at dawn and dusk they fill […]

In praise of routine

I like routine. Someone told me I’d be a liability living cross-culturally because of that but I’m not wedded to it. Things come up: kids get sick, sometimes friends are in need, I’m asked to teach at something at the last minute, we’re informed that we’re hosting a dinner, etc. […]

A TCK, saying grace, and what it shows about his cultural background

The other day at our breakfast table, Elliot came out with, “They don’t say grace before they eat at my kindy.” Arthur and I tried to work out what he was drawing the comparison with. We have never been a big grace-saying family. We’ve been doing it a bit more […]