Reaching for normal and she’s not there

The day before we came back from our holiday at the beach, I caught myself thinking, “I can’t wait to get home to see Red Twin.” Isn’t that weird? Red Twin is not part of our life in Dar. She’s never even been to our current house there. I did […]

It’s like the dominant emotion of grief is confusion

The first three months of the year really do suck. Our birthday followed by the anniversary of Red Twin’s death in quick succession. I do not have a plan for Tuesday. It’s not disorganisation. I’ve known the date was coming. It’s hard not to. Apart from the fact 22 March […] 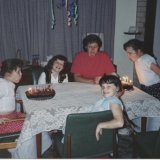 Dear Red Twin I’m 39 tomorrow. You’ll always be 35 I guess. I keep thinking I’ll stumble onto a way where I’ll feel OK about my/our birthday but here we are at no.4 and I’m at a loss again. I don’t sleep, I don’t want to see anyone, I don’t […]

The seasons are changing again

In our backyard, the teak and custard apple trees are greening again after losing their leaves in the cooler season. The ground is bone dry as we await the big rains. (Normally we expect them at the end of the year but with climate change the seasons have become more […]

I recently got access to some videos Red Twin made while she was in Central Asia. I’ve been watching them and will watch some more tomorrow on the 3rd anniversary of her death. The first video I watched was her telling about a fabulous night out she’d had, one where […]

There are no new photos

In my dream Red Twin and I were up to some kind of mischief. These things are hazy in dreams. But in the middle of it we took a break and were in a kitchen cooking, eating, playing with my little ones. And we stopped to take some photos. We […]