Hearing and Knowing: Theological Reflections on Christianity in Africa

Hearing and Knowing: Theological Reflections on Christianity in Africa is written by Mercy Oduyoye, arguably Africa’s foremost female theologian. A Ghanian, her perspective is shaped by a different context from the one we find ourselves in. Nevertheless, she brings some strikingly relevant questions, in particular, what does Christianity offer to […]

In Orobator’s discussion of the relationship between faith and culture, and how this has unfolded in the African context, he provides some useful distinctions for words that can sometimes sound pretty similar!

How far can contextualisation go? 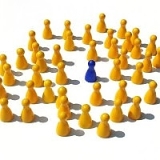 I believe in contextualisation, of putting off my own cultural baggage to take up another culture. I believe in it as an act of love, because it communicates the dignity of that culture and an act of humility, because it doesn’t assume that my culture is superior. People like Roberto […]

His family were pretty miffed. He was an aristocratic Italian and the nephew of a cardinal. Now, not only had he joined the Jesuits, he had decided to move to South India!