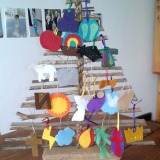 Merry Christmas! Today we put the final ornament on our Jesse Tree. It tells the whole story of the Bible over the Advent period, as we remember Jesus’ first coming and look forward to his second. There are lots of different versions, but below is the one I’ve developed over […]

Two of the most controversial and prominent figures in evangelical Christianity are Rob Bell (of NOOMA fame) and Mark Driscoll. Both emphasise the importance of engaging with culture, ‘building bridges’ with unbelievers – both have called their churches ‘Mars Hill’ after Paul’s encounter in Acts 17. Yet they have very […]