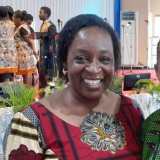 Today at church we had Faraja Hamuli speak. She is the national leader of the women’s wing of our denomination in Tanzania and in the whole of Africa. She spoke on the woman at the well from John 4, “Give me this water.” For keen students of African prosperity theologies […]

The phrase “just have more faith” is a hallmark of the prosperity gospel. I have generally also perceived it to be detrimental. Here are people who already have so little and you are telling them that they also don’t have enough faith?! Adding insult to injury, you tell them that […]

It’s not the prosperity gospel

Luphurise Mawere, whose podcast I’ve written about recently, advertised in our networks her online financial literacy classes. She said, “the secret to change your financial situations lies in acquiring right skills, knowledge, strategies and tools that will help to make sound financial decisions.” The response from one senior TAFES associate […]

In Tanzania, pursuing success is a moral obligation

In the English dictionary, ustawi (ooh-STAH-wee) is prosperity or welfare; mafanikio (ma-fa-nee-KEE-oh) is accomplishment or success. The latter is a very popular topic for teaching in Tanzania. The former does not feature as much, but a long-time missionary suggested it to us as an alternative to mafanikio to distinguish prosperity […]

Another African critique of the prosperity gospel

In our writing on prosperity, Arthur and I have been concerned to give space to Tanzanian thinking about the prosperity gospel. Working within our context, which is urban and educated Tanzania (not the 70% of Tanzanians who live in villages!) we have learned that they mean something different by that term from westerners, […]

Talking past each other about the ‘prosperity gospel’