I read a brilliant article the other day about the question, ‘But, is it safe?’ We’re getting this question all the time as we prepare to go back to Tanzania. At one level I think people are probably just asking, ‘is there a war on there?’ because that’s the common portrayal […]

The Holy Spirit and its role in the Christian life, according to my mentoree

We’ve observed in Tanzanian students talk of ‘losing the Holy Spirit’ and before each exam period, we have been included in massive prayer days where students go from church service to church service, receiving a special blessing at each. We were concerned that this was an issue of assurance. Did […]

It was the morning of a public holiday and we’d gone out for a family walk to buy some bananas from a local stall. People call out to us all the time so we thought nothing of replying pleasantly to the three drunk guys sitting on the new drain constructions […]

The conversation with the teacher got completely derailed… 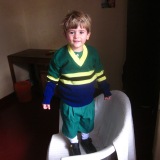 Twice in the preceding weeks, Elliot had come home from school talking about people hitting. We hadn’t wanted to alarm him or make a big deal, so we’d made very casual inquiries. Who was doing the hitting? Why? He replied, ‘They were hitting to make the children share.’ Sounds like […]

The lady at the post office looked at me like I was an idiot. And wasting her time. Just, you know, making a fuss for no reason. I was back for the second time to tell her that our PO box needed fixing. Half the screws on the inside which […]

Risk series: from fear to faith

On our first week back at church here in Adelaide, one of the ‘greeters’ at the door recoiled at the idea of taking our baby to Tanzania. (I was just over 38 weeks pregnant at the time. Elliot was born 4 days later.) After her initial shock, this lady said, […]