There has already been some discussion about voting as a Christian in my how to vote.  Here are three more things to keep you thinking!

The Australian Christian Values Institute has republished their usual checklist of the issues they claim Christians should vote for.  Of the 23 issues they list,

And that — apart from a couple of things about prayers in parliament, education, and drugs — is about it.  Umm, OK…  Since when does this particular handful of issues exhaust a Christian political outlook, even if they are the most pressing issues?

The two directors of the Centre for Public Christianity have been doing their usual top-flight work in the media.  John Dickson discusses the Christian vote here, emphasising that it must always be a vote for others.  Greg Clarke asks whether Australians need a Christian Prime Minister, here.  Both articles are helpful in waking us up to post-Christendom realities and urging us to consider our priorities as the Body of Christ — plus helping the rest of Australia understand what we’re really on about.

The Political Compass site has added a basic breakdown of the Australian election.  Everyone has moved further right, both economically and socially.  They note, as others have, that the Greens have made the transition from a single-issue party to a comprehensive social democratic platform.  Remember to take the test to get your own political compass! 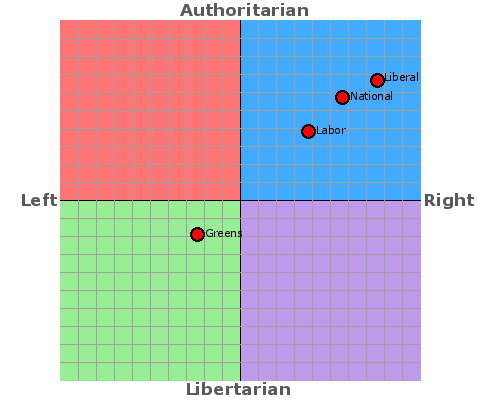 As always, I’d love to hear what you reckon!