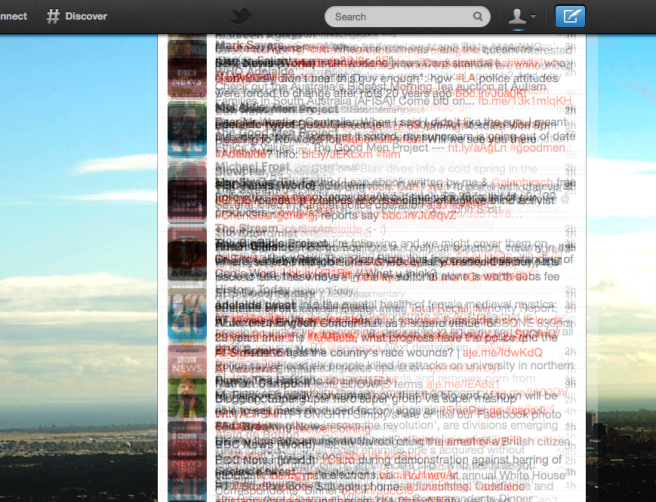 Twitter is pretty straightforward: it’s a sort of public billboard where people display things. And it’s not hard to learn, with only a handful of conventions like the retweet (RT) and the hashtag (#), maybe with some evolutions thrown in.

So: you get on Twitter, you make a witty observation, you link to something and you retweet someone. Simple, right? But I’ve been wondering not just what makes for good Twitter use but what makes a good Twitter user: why should I even be on Twitter in the first place? Here’s what I’ve got so far.

1. Be intentional. We’ve all got a tale or two about an early-morning battle with public transport or about the sublime recesses of a coffee cup, and lots of people on Twitter seem to treat it much the same as Facebook, as a ‘wall’ for recording experiences. These are two different things, though: in contrast to Facebook’s focus on friends sharing everyday life, Twitter is geared towards ideas, topics, events and expertise. Using Twitter as a personal platform is fine if you’re famous, but I reckon it’s good to have a more specific reason to be on Twitter. For me, narrowing down my profile description was one way of helping me to decide.

2. Be of service to others. Twitter seems to be fuelled by an ethos of collaboration, so what matters is reciprocity. That means I’m only really engaging with the rest of Twitter when I’m acknowledging others. There are all sorts of different ways of doing this, from responding to mail to being stupidly hilarious. One of my main goals has been simply to redirect others to useful stuff. Meanwhile, part of being sociable and reciprocal will mean retweeting or mentioning the other tweeps who refer to you.

3. Write for a readership. Because I’ve been tweeting as an intercultural worker rather than as Arthur Complete With Beard And Everything, I try to keep my tweets revolving around just two or three things. But still, as Rex Hunt used to say, who gives a fat rat’s crack? How would I know what others want to hear? Well, one way of considering it is this guide to being retweetable. Its conclusion is pretty straightforward: “Notice the types of posts you personally RT and begin to develop a style. You don’t have to stick to any certain theme, but people like to have an idea what they will find at your feed.”

4. Consider your craft. If you care a lot about your stats (number of followers, referral traffic, metrics of influence), there are definitely ways of giving yourself a leg-up. Personally, I reckon that’s good for giving yourself a big head and not much else. I’m more interested in Twitter as a genre of writing, in which case there’s an art to it!

5. And finally, make sure you’re not posting the most annoying tweet in the world!

What all this comes down to, perhaps, is this: be yourself but don’t be on about yourself.

What has been your experience of Twitter? Why do you use it? What are your tips?