I was keen to hear more from Vinoth Ramachandra about his background and the vision we’ve been discussing recently here. Here’s what he had to say. He is the Secretary for Dialogue and Social Engagement in IFES and you can find him online at his blog.

Tell us a bit about your involvement with the university world. Where did it start? 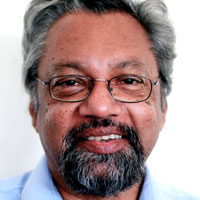 VR: It started as a 18-year old student in the University of London. Although I was an engineering student I was fascinated by so many other academic disciplines, attended public lectures in the university on all sorts of topics and read widely. I was a very new Christian when I went to London from Colombo. I looked for Christian professors who could help me think in a Christian way about my studies and other things that interested me. I still look back to hearing outstanding Christian thinkers like Donald McKay, Sir Norman Anderson and Kenneth Cragg who showed me that being a Christian didn’t entail intellectual stagnation.

How did you become involved with campus ministry?

VR: I was deeply involved in my Christian Union as an undergraduate. During my postgraduate work I started a Christian-Muslim dialogue group among my fellow doctoral students; as well as convening a group in London that comprised Christians like myself who were interested in ministry among Muslims. We met once a month and read papers to each on some topic that we had researched (e.g. ‘Islamic philosophy of science’, ‘The Qur’an and women’). Some of those who were in that group are now well-known internationally in the area of Muslim-Christian relations. I, however, changed direction and found myself returning to Sri Lanka (initially for a year, but it has turned out to be indefinite!) and starting a university ministry along with a group of local graduates.

How has your understanding of the place of the university developed? Where did the vision for ‘engaging the university’ come from?

VR: I have always been aware of the massive influence that the university has on the spread of ideas and the development of social and political institutions in a society.

I have always understood my ministry as a ‘university ministry’ and never as simply a ‘youth ministry (the youth simply happening to be students)’. If I had envisaged my work as the latter I wouldn’t have stayed in it for more than perhaps three years.

So, although I may not have used the phrase ‘engaging the university’ until a few years ago, that has always been my vision for IFES: working with postgraduate students, research scholars, lecturers, administrators to demonstrate the practical relevance of the Gospel to all that goes on in a university (not only the academic conversations but issues of justice, corruption, etc).

I have also never separated university ministry from wider engagement in society. This is, in any case, impossible in most parts of the world, as students are often in the vanguard of social and political change. Students in Sri Lanka that I was working with (whether Christian or non-Christian) were caught up in the political upheavals of society and couldn’t isolate their student life from the latter. Even as a young pioneering staffworker in Sri Lanka I used to write to the national newspapers on a range of social, economic and political issues that we faced. And when I was the first General Secretary of the movement that we came to call FOCUS (Fellowship of Christian University Students) we used to issue public statements on national policies, especially those that impacted university students and universities. In this way FOCUS was giving the intellectual lead to the wider church and that is what I would like to see happening in all our IFES national movements.

What do you love about IFES?

VR: I was head-hunted into IFES by Chua Wee Hian and Ada Lum. What attracted me was that, unlike all other international Christian organizations, IFES is genuinely a partnership of equals and not a Western outfit with ‘branches’ all over the world. The stress on developing truly contextual national ministries, under national rather than Western leadership, coupled with the fact that there was no ‘headquarters’ which tries to control us — this was unique and is now being imitated belatedly by some other organizations. I have enjoyed considerable freedom in IFES to develop my own thinking, even though I have missed more rigorous theological debate across regions (and even movements within regions) — I am told that more of this happened in the 1960s and 1970s.