The ‘welcome back’ of home

Arthur sent me this photo on whatsapp the other day. It’s of the TAFES HQ staff. They’re the people he spends his days with. Our family loves each of these people dearly, and in many ways they’re the reason we live in Tanzania. But they’re not the people I spend […]

The soundscape of ‘home’

Elliot calls our apartment in Dar es Salaam ‘the bat house’, because there’s a big colony of bats in the surrounding trees. From the balcony where we hang our washing, you can look directly at bats hanging in the tree only centimetres away, and at dawn and dusk they fill […]

In praise of routine 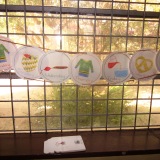 I like routine. Someone told me I’d be a liability living cross-culturally because of that but I’m not wedded to it. Things come up: kids get sick, sometimes friends are in need, I’m asked to teach at something at the last minute, we’re informed that we’re hosting a dinner, etc. […]

The thing about moving a lot is that it’s hard to work out where home is. While we were in Melbourne, we missed Adelaide. But Melbourne grew on us and now that we’ve moved back to Adelaide, I realise that Melbourne has turned me into a cafe snob – Adelaide […]

Almost a soft spot for Melbourne

The arrogance of Melbournians never ceases to amaze me. They consistently and forcefully state that Melbourne is the best city in the world, often with very little data to compare it to or experiences of living elsewhere. However, almost three years down the track, I almost have a soft spot […]