The ‘welcome back’ of home

Arthur sent me this photo on whatsapp the other day. 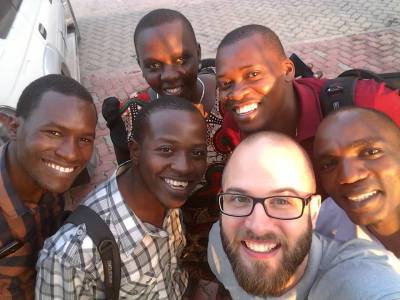 It’s of the TAFES HQ staff. They’re the people he spends his days with. Our family loves each of these people dearly, and in many ways they’re the reason we live in Tanzania.

But they’re not the people I spend most of my days with. I see them on average once or twice a week, either in groups or as individuals. The people I see as part of my daily life are:

So many things that just happen in Australia, or are automated, or can be dealt with in one place, are distinct tasks here, but they are more than tasks. They are relationships.

The rubbish lady and I had a lengthy and quite technical discussion out on the road the other day about Red Twin’s progress. She and I often chat, so I’d told her before I left to go to Australia that I was going for cancer tests, and not long after that Arthur and Elliot had joined me and Callum, so she figured something big had happened, and she’d been asking around the neighborhood if anyone knew what had happened to us. When she saw me out on the road the other day, she held out her arms for a big hug, delighted to be reunited.

I guess it’s not surprising that we were missed, nor that we have been welcomed back so warmly. As white people, we are highly visible, and when we first arrived I made it a priority to make friends around the neighborhood. We also have quite a different dynamic with Tanzanians from the Wahindi who populate our suburb.

But Swahili has this word, -pachika, which means something like ‘to insert to fix’. It’s something that doesn’t belong there, but kinda gets jammed in, and becomes part of the whole. And I’m always wondering how successfully we have -pachika-ed. How well have we integrated, even though we are different?

That’s an unanswerable question in many ways, but as I got to thinking about all the different people I see in my daily life, I felt another dimension to my sense of homecoming. It’s not just us who feel that this is our home; we are also a part of the fabric of life here. Not only do we belong to this place, but we belong to the people here too.