Where are the Bible infographics?

Infographics radically summarise complex information by visualising it. They range from the functional (like subway maps) to the aesthetic (more like pieces of art). In our information-saturated online world, infographics have become so commonplace that, along with the serious stuff, they’re now being parodied for entertainment.

After the travesty of Project Reason’s Bible misinfographic, I had a look around: are there many good Bible infographics out there? Here are some preliminary findings! 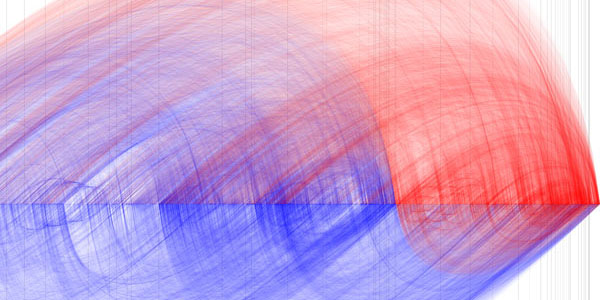 More usefully, Mark Barry has developed a great collection of Bible diagrams at Visual Unit. These are mostly concerned with biblical chronologies and descriptions, but an example of a good infographic is his depiction of the reliability of the New Testament.

The gold standard for Bible infographics seems to be the work of Chris Harrison, who has visualised huge amounts of raw biblical data in some beautiful and thoroughly mesmerising images.

What else is there? I came across an assortment of other Bible infographics listed at Information Aesthetics (‘Where form follows data’). Some of the most intriguing can be found at OpenBible.info.

Yet I’m interested in visualisations that depict something a bit different: the literary content of the Bible. Instead of data plotting or linear progressions, I’d like to see visualisations of biblical themes and concepts — the tapestry of the Bible’s thought-world, with all its chiasms, nested boxes and helixes.

Anyway, let me know if you make any good finds!