I googled ‘God is a Negro’ after seeing it mentioned in an article in The Global Dictionary of Theology. It’s written by a free African American, Henry McNeal Turner, who was a church planter, pioneer of the African Methodist Episcopal Church, a chaplain in the American Civil War, and later  an evangelist to Africa. He wrote it in 1898 but it remains poignant today. It’s just a short piece so I’ve included it in its entirety below. (Bold emphasis is mine; underlines are original.) 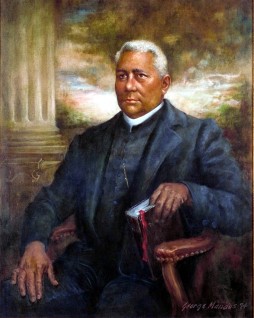 Demented though we be, whenever we reach the conclusion that God or even that Jesus Christ, while in the flesh, was a white man, we shall hang our gospel trumpet upon the willow and cease to preach.

We had rather be an atheist and believe in no God or a pantheist and believe that all nature isGod, than to believe in the personality of a God and not believe that He is Negro. Blackness is much older than whiteness, for black was here before white, if the Hebrew word, coshach, orchasack, has any meaning. We do not believe in the eternity of matter, but we do believe that chaos floated in infinite darkness or blackness, millions, billions, quintillions and eons of years before God said, “Let there be light,” and that during that time God had no material light Himself and was shrouded in darkness, so far as human comprehension is able to grasp the situation.

Yet we are no stickler as to God’s color, anyway, but if He has any we should prefer to believe that it is nearer symbolized in the blue sky above us and the blue water of the seas and oceans; but we certainly protest against God being a white man or against God being white at all; abstract as this theme must forever remain while we are in the flesh. This is one of the reasons we favor African emigration, or Negro nationalization, wherever we can find a domain, for as long as we remain among whites, the Negro will believe that the devil is black and that he (the Negro) favors the devil, and that God is white and the (the Negro) bears no resemblance to Him, and the effect of such a sentiment is contemptuous and degrading, and one-half of the Negro race will be trying to get white and the other half will spend their days trying to be white men’s scullions in order to please the whites; and the time they should be giving to the study of such things will dignify and make our race great will be devoted to studying about how unfortunate they are in not being white.

We conclude these remarks by repeating for the information of the Observer what it adjudged us demented for — God is a Negro.

Tagged as: contextualisation God is a Negro Henry McNeal Turner