Ice cream is available in Dodoma, though flavours fluctuate, but block (or any!) chocolate is difficult to come by. If you do find it, it’s often pretty old and white. Cocoa is available though (it being a cash crop grown in Tanzania) so one day in a fit of chocolate craving, I wondered if I could make a chocolate ice cream.

I had previously thought that ice cream making was for gourmet types, or at least those who had an ice cream maker, because there seemed to be so many steps to the process and I wasn’t confident making a custard. But my desire for chocolate was strong and so I overcame my hesitation and discovered it wasn’t that hard at all. Lucky I did, because IT WAS THE BEST CHOCOLATE ICE CREAM I HAVE EVER EATEN! It’s smooth, rich, creamy and so incredibly chocolate-y! It’s also cheap because it uses cocoa instead of chocolate. Cheaper than buying ice cream in Australia, even! 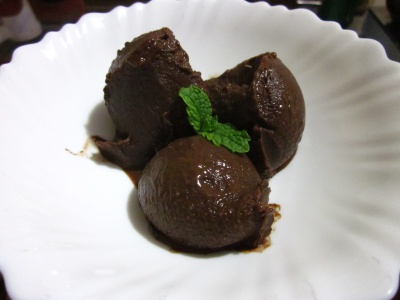 Next week, I’ll give you my recipe for passionfruit ice cream which uses the other half of the eggs!