This semester I am auditing ‘Literary Theory and Development of Kiswahili Literature’ in Swahili! The main purpose is to push my Swahili forward, especially my listening comprehension over longer periods, but I’m also hoping it will give me more of a connection with students on campus. So far there’s only been one lecture. Seminars start next week. I was pretty excited on my first day (see pic below!) and here are some of the things I learned: 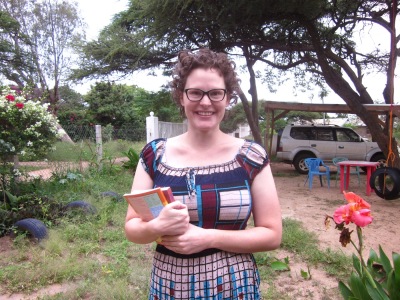 The teaching methodology was also different. Perhaps it was just that it was the first lecture, and I didn’t pick up everything that was going on, so I could be off the mark here, but two things struck me.

1. Learning seems more objective. When I started uni in Australia, one of the things I had to get my head around was that lectures were not unbiased. Rather the, lecturer was presenting their contribution to a broader discussion. They weren’t giving ‘the meaning of Jane Eyre’, but ‘a reading of Jane Eyre’, their own take on it. This was especially tricky because I don’t remember them ever telling us that was what they were doing or explaining how the process of literary criticism evolves. However, the whole first lecture of my Swahili class was asking questions like, ‘what is theory?’ ‘what is literary theory?’ ‘what is literary criticism?’ and the answers were given as expanded dictionary definitions rather than as one person’s opinion.

2. Facts were more important than context. In the discussion about literary criticism in my Swahili class, Aristotle was identified as the father of it. This was stated, re-stated and talked around quite a bit, but almost no information about Aristotle was given! Perhaps it was assumed students already knew who he was or had learned about him, but I would normally expect that if you were going to say that Aristotle was the father of literary criticism, you would also talk about his context, concerns, and why they have come to be so influential. On the surface, this looks like rote learning without understanding but I feel like I don’t yet have enough experience or understanding of the class to make that call.