3 tips for Bible college if you’re heading to Africa

We’re coming up to 18 months here in Tanzania which is giving us cause for reflection on some of the preparation we did before leaving Australia. We can’t recommend CMS’ 5 month training course highly enough and there were some general things we were glad we did at Bible college. For example, if a ‘mission-y’ essay question was offered in our exegesis courses, one of us did it. That helped us to learn to read the Bible missionally rather than seeing mission as a subset of Biblical themes. Those things are good for anyone who’s heading into overseas missions to do (and I would argue those staying in Australia as well!) but there were three things that we did during our time at college that prepared us well for Africa in particular.

First, we did an Old Testament course called Wisdom Literature. That’s books like Proverbs, Job, Ecclesiastes, Song of Songs – the sorts of books that are a bit more ahistorical, and are harder to fit into an overarching biblical narrative. However, Proverbs in particular is pretty well the bread and butter of Tanzanian preaching, and we’ve found this course in Wisdom Literature to be instrumental in helping us interpret and process the talk of prosperity that is prevalent in Africa more generally. We did stacks of great courses at college that we’ve continued to draw on but this has been by far and away the most relevant and particular to Tanzania.

Second, we spent time with African people. Arthur in particular was involved with Sudanese people. There are things common to African peoples which mean that exposure to one means meeting others is less of a shock. But being involved with the Sudanese community taught us the huge cultural range that exists in that one community — Arthur remembers praying with a group of them with 6 different languages used! We also had a bit to do with an Ethiopian Pentecostal Church and learned that they saw Ethiopia as the country that stopped the spread of Islam further south into Africa for many years. From them we started to see particular identities within Africa and how the countries self-identify and interact with one another. It meant we came to Africa already with a strong sense of the diversity that exists both in the continent at large and within each country and community.

Third, we spent time with non-African people. We were part of an international Bible study and got to know Iranians and Nepalese in particular and appreciate something of their cultures. We think that broader cultural exposure has helped us to work against falling into binaries. It’s easy in cross-cultural work for your host country to become the only horizon, and to constantly compare it to your passport country. In a system like that, one is rich and the other poor, one is this and the other is that. They’re either similar or different. However, having more cultural experience in the mix brings greater opportunity to sit with the diversity rather than trying to classify it. I’ve found it good in speaking to Tanzanians as well. When I speak to Tanzanian women, I mention some of the experiences Red Twin has related to me about the lives of women in Central Asia. All of a sudden, it’s not about the privileged white woman telling the oppressed black women about life, but about us sharing together in sympathy for our sisters elsewhere. 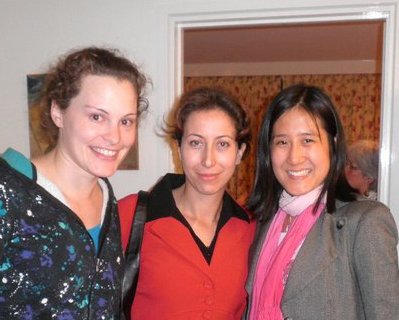