Let’s return to Evangelical Postcolonial Conversations and the chapter by Victor Ifeanyi Ezigbo and Reggie L Williams, ‘Converting a colonialist Christ: toward an African postcolonial Christology’.

(1) The missionaries’ Christologies did not exhaust the significance, or knowledge, of Jesus Christ, and (2) most of the Christologies failed to present Jesus Christ in a way that steered clear of Western colonial agendas and derogatory views of indigenous Africans. (loc 1368)

This is the need for an African Jesus. 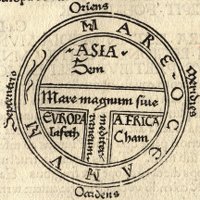 The ‘T and O’ map became part of the theological rationale for European supremacy. Shem (Jewish/Asia) is superseded by Japeth (Christianity/Europe), who is destined to overshadow the cursed Ham (Africa).

As J V Taylor put it, ‘If Christ were to appear as the answer to the questions that Africans are asking, what would he look like?’

Firstly, Ezigbo and Williams uncover the backdrop of colonial thinking, ‘a mindset that institutionalizes the colonizer as the arbiter of self-determination, civilization and all truths’ (loc 1413). Their historical survey is crisp and appalling: a world in Europe’s own image; a world in which you encountered Christ as you were inducted into Europe. Most poignant of all is the frustration of Nigerian bishop Samuel Ajayi Crowther, who ‘lived long enough to see the leaders of CMS repudiate his efforts’ (1464).

If that was not truly Christ in Africa, they ask,

Can [Africans] worship God, through Jesus Christ and in the power of the Holy Spirit, in African languages and with African indigenous religious thoughts, without being haunted by the claims that they are betraying the Christian gospel? (loc 1471)

If this sort of self-theologising is taking place, what will a postcolonial and African Christology look like? The book returns to this in later chapters, but here the case study is Ezigbo’s own Revealer Christology. As revealer of both humanity and divinity, Jesus not only embodies both God’s presence and true humanity, but also reworks our existing ideas about divinity and humanity — both African ideas and Western ideas. This is therefore both communicative and hermeneutical:

Jesus is the cornerstone for ongoing christological inquiry. All Christian responses in/to modern Africa are subjected to the fulcrum/crucible of Jesus. I’m seeing lots of similarity here with Bediako’s work.

The authors are right, I think, to stress the ambivalent nature of the relationship between missionaries and colonists, but I also think this is the point at which we must interrogate and acknowledge local agency. The fact that missionaries presented a Western and/or colonising Christ does not mean that Christ was not present to African communities. I take it that a genuine (if threadbare) cross-cultural transmission of Christianity has already taken place and created emerging African Christianities. In acknowledging this, we can affirm that there are African Christian communities which exist today as more than merely foreign imports.

This clarification is in keeping with the authors’ emphasis on self-determination, not counter to it. It seems to me that the Christianity which Africans adopted for themselves was something more than a merely Western cultural form of Christianity, yet also something less than a full-fledged African Christianity. Westerners were unable to conceive of the significance of Christ outside their own horizons, and were incapable of seeing the extent of the power of Christ in store for African communities. There are African Christian communities that have recognised Christ for themselves, and are now continuing to explore and discover the extent of the power of Christ in their context.

What about the grassroots?

This chapter majors on content rather than form/methodology, and I’m not sure the two can be separated, even within the tight confines of a chapter. So, for me, this chapter leaves aside one weighty issue in particular: what it means to do theology in African communities.

Who are ‘African theologians’? In Western terms, theologians are those possessing formal theological education and able to do systematic theology. But what is the significance of ‘uneducated’ local pastors and ministers? What is the significance of oralature and orality in a context where written communication is typically peripheral? These are questions of the grassroots — the ways in which Africans conceive of, practice, and promote their faith in the course of their lives, especially ecclesially, in speech, song and prayer.