Including the Middle in Tanzania: Jesus as Ancestor

Christ has been presented as the answer to the questions a white man would ask, the solution to the needs that Western man would feel, the Saviour of the world of the European world-view, the object of the adoration and prayer of historic Christendom. But if Christ were to appear as the answer to the questions that Africans are asking, what would he look like? (J. V. Taylor, 1963)

How do we describe Jesus in African categories? It’s a question that African theologians have been reflecting on since the 1960s, including the idea of Jesus as Ancestor. In this brief post, I’ll sketch out how Kwame Bediako has approached the issue, and we’ve made some more diagrams to help.

Some dispute consideration of Jesus as Ancestor, such this article, which argues that Africans don’t recognise the connection at a grassroots level. But it’s not surprising that African Christians can easily point out differences between Jesus and the ancestors — in many important respects, Jesus is not an ancestor and neither is Jesus like the ancestors.

That’s not the issue, however. We need Christian thinking that deals with the ancestors, truly engaging with cultures that profoundly remember and revere them. (Remember that our anxiety about syncretism cuts two ways!) Kwame Bediako asks: How does Jesus fulfil and transcend the role of the ancestors?

Who are the ancestors, then? In African traditional religion, they’re both part of the spirit world and part of the tribe. The ancestors are therefore more important than other spirit beings because they’re more human, standing in solidarity with the tribe. They’re more like family than something ‘religious’ — and, unlike God, the ancestors are not seen as transcendent. Note that we’re talking about veneration of and communion with ancestors, not worship of ancestors. 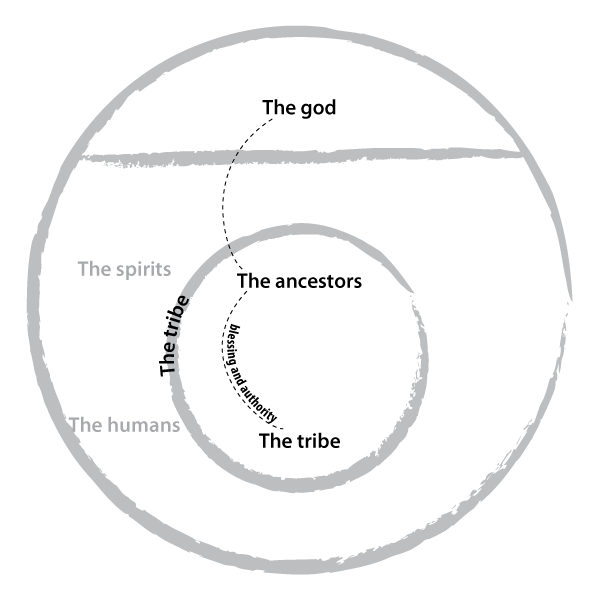 With God having withdrawn to a distance, the ancestors are looked to as mediators of blessing and authority for the tribe. The ancestors are worthy of honour because they’ve given so much to the tribe, going before the tribe and giving birth to the current generation. They’re the source of social harmony and identity; they’re the source of life’s basis and continuity. The power of the ancestors isn’t just ‘spiritual’ but is wrapped up in the life of the community.

Rather than simply obliterating the ancestors’ role, Jesus transcends and fulfils it, becoming the Supreme Ancestor, that is, the true mediator.

1. INCARNATION. Jesus comes not only from beyond the tribe but from the transcendent realm itself, from God, so Jesus can truly mediate blessing and authority. And this means the tribe finds its most profound solidarity in Jesus, argues Bediako: ‘Our Saviour is our Elder Brother who has shared in our African experience in every respect, except our sin and alienation from God.’ In crossing over from the transcendent, Jesus’ solidarity transcends ‘the mere ethnic solidarity of lineage ancestors.’

2. ASCENSION. Following his resurrection, Jesus has returned to the transcendent realm, the place of ultimate power. As Lord of all realms, Jesus reveals the truth about reality and demonstrates victory over the forces that previously threatened the community. From there, Jesus sends the Spirit to undo the deception and influence of the Evil One. While the ancestors could not conquer death, Jesus has demonstrated the power of an indestructible life (Hebrews 7:16).

3. UNION. The text of Hebrews has a strong emphasis on mediation and Bediako singles out this text as a letter to Africans. Jesus’ mediation is perfectly and eternally effective, uniting God and humanity:

As mediator of a new and better covenant between God and humanity, Jesus brings the redeemed into an experience of a new identity in which he links their human destinies directly and consciously with the eternal, gracious will and purpose of a loving and caring God. No longer are human horizons bounded by lineage, clan, tribe or nation. For the redeemed now belong within the community of the living God, in the joyful company of the faithful of all ages and climes.

There’s much more we could discuss here, and we could go on to explore the work of Tanzanian theologian Charles Nyamiti in particular. What are your questions and reflections at this point?

In the next post, we’ll begin to consider how the supremacy of Jesus plays out in everyday life.