A short history of the mkesha (overnight)

As the new academic year begins in Dodoma, it seems like every weekend features another mkesha, the big all-night gathering for university students.

The mkesha phenomenon is little more than a decade old. We’re told it began in Dar es Salaam around 2000. With packed daily timetables, students were busy, but were not satisfied with their campus fellowships’ one-hour gatherings, which they felt could only scratch the surface. The mkesha was developed to make more time available and enable things to go deeper. There would be praise, prayer and teaching, and when students got drowsy around midnight, a big injection of singing and dancing would rev them up to concentrate on more teaching and content in the small hours. (Yes, it goes all the way through to dawn!)

The 2014 ‘Night of Impact’ mkesha was organised by the Lutheran church (KKKT).

These days, that big music session seems to have ballooned to the point where it has become the focus. At some of the mkeshas we’ve been to, the teaching segment has ended up in the midnight hours. Some people nod off at this time; others leave the auditorium to pray or talk.

One contact of ours, who never saw anything like mkeshas during his university days, is concerned that less time is now being devoted to teaching and learning. With all the introductions, greetings and interviews, not to mention singing and dancing, it’s easy for teaching to get crowded out. Another of our friends is eager to see a renewed focus on smaller groups, which can offer deeper life impact than big-group gatherings.

For now, it seems the mkesha is the bread and butter of student ministry events, at least in Dodoma. My friend notes that in Dar es Salaam, students might go to one mkesha at the beginning of semester and another at the end, but only within their campus. The universities in Dar are bigger and more established, and it’s also harder to travel across town. 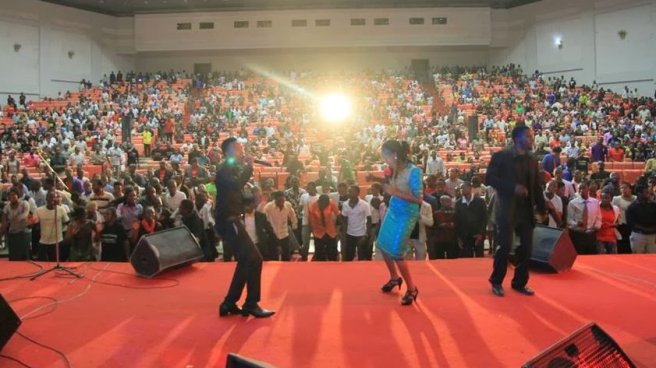 Here in Dodoma, though, the mkeshas often attract students from all 10 tertiary campuses, and sometimes free transport is provided. At the beginning of semester, when students’ workload is lightest, everyone schedules their (annual) mkesha in the same period, so it’s possible to go to a different mkesha every weekend. Everyone seems to have a piece of the pie and that’s apparently part of the appeal for students. Some mkeshas are organised by student fellowships such as TAFES, others are organised within a denomination or, as in the case of ‘Campus Night’, initiated by a local church. 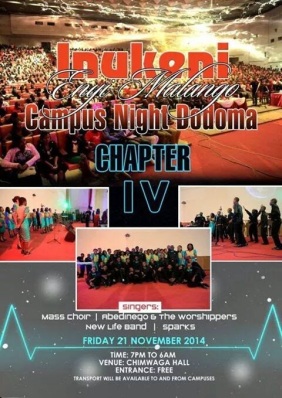 ‘Campus Night’ is the biggest of the Dodoma mkeshas, founded in 2011 by an AOG pastor burdened with the need for students to commit their lives, decisions and futures to God. In 2014 it was said to host at least 4000 students. There was talk of students’ God-given responsibility, the need to stay on track and to work for the good of the nation. Two guest speakers provided teaching alongside singing and dancing, praying, testimonies, and a call to repentance.

The influx of wanachuo/wanavyuo (tertiary students) to Dodoma has brought ‘unprecedented moral degradation’ according to one journalist (a message which the udaku rumour mills are intent on reinforcing). However, there are also momentous opportunities for students, and the mkesha is an attempt to capitalise on this.