A money sermon at a pentecostal Tanzanian church

On Sunday, TAFES were doing some deputation at Victory Christian Centre and I went along. VCC is a TAG church and the pastor is a TAFES graduate, has been a TAFES staffworker and continues to be highly supportive of TAFES.

The church is a big white closed tent and I prepared myself for a very sweaty day, but upon entering I discovered that it was air conditioned! The English service was up first and the whole experience was soaked with modernity: the attendees were very sharp, well-dressed professional looking men and women in their 30s, 40s and 50s, and there was a children’s program. The music was almost jazzy in feel and deafeningly loud, like a stadium experience which matched the stage and lighting. 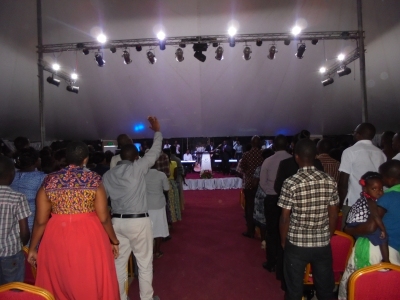 The topic for the sermon was giving and what interested me about it was the way the preacher, Huruma Nkonde, was addressing and critiquing issues in Tanzanian society more broadly, and the Tanzanian church specifically.

He began by speaking of giving as both stewardship and investment. Everything belongs to God and is to be used for his purposes, so invest in his things, and don’t labor under the delusion that you have earned this money or got yourself into a wealthy position. Your wealth could be taken from you at a moment’s notice.

His third point about giving was that it is to be proportional, that is, in accordance with your means. Tanzania is a benefactor culture and it is a great honor to be the one who bestows blessing to others. You may feel tempted to give beyond your means in order to receive this honor, but in doing so you would not care for your family. Notice that there is little exhortation to generosity here. It’s already a given part of the culture. Instead, the question is how to conduct that generosity. So the preacher continued, resist the temptation to show off. Be content with giving less if that is what God has given you. Don’t feel you have to compete to be like others. He didn’t say, ‘find your identity in God and then you won’t have to worry about what others think of you’, but it was along similar lines: you answer to God, not humans, so give what you are able. The pastor drew a contrast here with other Tanzanian churches who pressure people to give well beyond their means. He considered this foolish, and sinful, if it were to leave one’s family without means for daily living (1 Tim 5:8).

In speaking about the means that you have, he also brought a comparison with wealthier nations. He told of going to visit the Logos Hope, and being shown around by the Director who is a friend of his. It takes 10,000 Euro per day to keep the Logos Hope running, and the pastor joked, ‘Just stop running it for a week and give the money to me and I’ll show you what we can do in Dar!’ He was astounded by that kind of money. But then he said, ‘These are the people who are building space shuttles.’ His point was, the scale is completely different, and he went on with this sense that managing that kind of money is a very difficult task, and that there’s something protective about having less to spend.

Finally, he spoke of three types of offering. The first is first fruits, whether it be the first baby of one of your animals, or a portion of a promotion or bonus you receive at work. The second was a love offering, for those you want to care for or support. The third was a thanksgiving offering. He spoke of Mary and Joseph taking doves to the Temple for sacrifice at the birth of Jesus. Though they were poor, they brought something out of gratitude to God. He said, there are many who struggle to have children but they are not the only ones who should be thankful when they are given a child. All of us should feel an overwhelming sense of appreciation because if it has been easy for us, that has happened only by the hand of God. God is not obligated to give us good things and it is often his sustaining of us through safety or removal of obstacles we didn’t even know about that we forget to thank him for. He had a very strong sense of God’s providence in each of our lives.

After the sermon there was a ‘repeat after me’ prayer. It went something like this: Bless the work of my hand so that I have something to give back to you. I rebuke the spirit of poverty and unsuccessfulness. I receive the spirit to be successful.’ The pastor spoke of being rich, not because of the work of your own hands (because all things come from God, not you), but in Jesus’ name. I was struck by how inseparable the Creator God is from economics in this worldview and indeed the pastor spoke of ‘financial salvation’. The goal of this wealth was clear however: it was to bless others.

The final benediction were the words of Psalm 23:6 “Surely goodness and love will follow me all the days of my life, and I will live in the house of the Lord forever.”