A story from the history of student ministry:

After an hour’s talk, I asked Rollo point blank, ‘Does the SCM put the atoning blood of Jesus Christ central?’ He hesitated, and then said, ‘Well, we acknowledge it, but not necessarily central.’ Dan Dick and I then said that this settled the matter for us in the CICCU. We could never join something that did not maintain the atoning blood of Jesus Christ at its centre; and we parted company. Norman Grubb 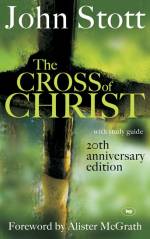 It’s part of the history of CICCU when, in 1918, SCM approached them to discuss reunification. This encounter clarified CICCU’s doctrinal emphasis, and has been seen as a key moment behind the foundation of IFES.

It was inspiring. It was also a cautionary tale: ‘And look what happened to SCM! They lost the plot!’

‘Do you put the atoning blood of Jesus Christ central?’ Yes, I said; and now I look back at the nature of my faith then. How much did I care about the many other elements of the gospel story, the incarnation, the healings, the teachings, the resurrection, the ascension? They were important in theory, and I wouldn’t have said they were dispensable. But I probably hadn’t heard so much about them, which meant that I didn’t give them much oxygen myself. As long as I had the cross, I was fine. As long as I had the cross in first place, other things could fade into the background, because they did not need to be foregrounded. I might have not have said as much, but my vocabulary of choice would have told you otherwise.

The centrality of the cross had, consciously or unconsciously, become a reason not to consider other dimensions of faith. Is that the inevitable end of using the CICCU story as a cautionary tale — or even of asking what the ‘centre’ of evangelical faith is?

Well, it’s a bit unfair to claim that, isn’t it? It’s a slippery slope argument.

‘The slippery slope’ is a logical fallacy, and all it takes is one counter-example to overturn the whole thing. Here’s one: John Stott himself resisted evangelical efforts to prioritise and summarise truth. He is known for saying, ‘Who wants an irreducible minimum gospel? I want the full, biblical gospel!’ Even The Cross of Christ goes on to explore a broader ‘centre’ than the CICCU story might suggest.

It’s not fair to say, ‘Focus on the cross and you’ll forget everything else.’ But this cuts both ways: it’s also not fair to say, ‘Take the cross off centre stage and you’re basically liberal!’ When Norman Grubb laid claim to ‘the atoning blood’, it might have been appropriate to the issues of the time, but it doesn’t mean every generation needs to take a stand on the same thing, and it doesn’t mean you’re going wrong if you don’t do the same.

Yet the slippery slope is more than just a convoluted way of saying, I’m right and you’re wrong. It’s a way of establishing our identity: a way of saying, we’ve decided on our direction, and this is how we got here. And the same goes for the idea of a ‘centre’. As Scot McKnight says in this excellent article about the atonement, we need to be honest enough (or postmodern enough) to admit that we search for a ‘centre’ in order to prop up our existing belief and practice. At one level, that’s entirely natural and appropriate, and there’s nothing to fear in being completely frank about that.

We always build our identity through stories, but the challenge is to keep ourselves from wielding our stories against others. As Tamie and I continue our involvement with the student movement, what stories will we tell? What decisions will we refer back to? What will be the defining moments? And, most importantly, how will we define ourselves constructively rather than by tearing down others?