Contextualisation is big deal for those of us who live in another culture. I defined it here as the necessity and complication of putting off your own culture to live in another.

I thought we might explore the idea by taking a case study: the small group Bible study.

Let’s start with the typical elements of a ‘small group’ in Australia: 6-12 people meeting for 2-3 hours including a time for socialising and food, a Bible study, and some time to pray for one another. Maybe a worship time as well. The Bible study likely has a ‘leader’ but it’s discussion based: everyone brings their Bible and it’s the reference point as people talk about what a particular passage means or how it applies to life.

How might this be contextualised to Tanzania? Here are 8 possible considerations.

What sort of food will you eat? Where will you sit? What will you wear? Many of these things are things you might think about in Australia (‘Will I bring muffins or chocolate?’; ‘Will I wear jeans or trackies?’; Will it be awkward if I sit on the three-seater?) but they’ll have a different overlay in a place like Tanzania – how do gender and age affect where people are seated, for example?

But let’s backtrack, because we’ve already made some assumptions such as:
– There are resources to provide food
– There is shelter, and indoors
– That people will sit

English is the language of essays and classrooms here; Swahili is the common language that people use on the street, but they might speak a tribal language at home.

Small talk is not just a social nicety here. To exclude it is the height of rudeness. If you don’t inquire about the welfare of each person in 3 or 4 different ways, don’t expect to have decent (or any) conversations. In a Christian context, if you think about teaching someone before you pray for their health/family/other problem, can you really have said that you care about them?

So let’s revise the idea of the small group being 2-3 hours. You’re probably talking at least half a day or at least a different distribution of time.

Even if you’re dealing with the ‘educated’, reading may not be the default. People might take things in better by listening than by reading. The idea of reading out a passage with everyone following along might be unusual. Checking back with particular verses, even more so. That leads to… 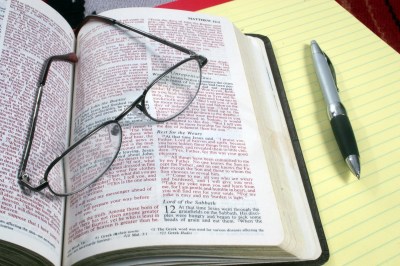 ‘Where did you get that?’ is a common question in small groups I’m used to leading. It’s about getting people to interact with the passage; it’s a way of equalising the group that puts the text as the authority with all of us equal readers of it. It works brilliantly in an egalitarian society (and is a good way of keeping people on topic!) But to have everyone offering ideas might seem very disrespectful in a hierarchical society where people expect to hear from the authority figure.

Critical thinking is highly valued in the west, including in our churches. We don’t want people to ‘parrot’ truth. We want them to own it, and the best indication of that seems to be that they learn by discussion and persuasion rather than by rote.

Putting 4, 5 and 6 together then, you have a small group where the leader might read aloud but is more likely to speak; people don’t offer their own views and learning is about hearing from the leader rather than forming your own view. (That’s not to say people don’t have their own views, mind you!) Suddenly your ‘study’ is looking more like a sermon.

All this is before you’ve even got to the question of what you’ll be studying. And if you’re the authority figure, that raises further considerations. Beyond method and mode (points 1-6), your task is to work out content. What will you choose to teach? Contextualisation exists not just on the level of how people learn but indeed what they learn.

The epistles are the most studied part of the Bible in my Australian circles and normally in small chunks, probably because in our culture we persuade by propositions and enjoy the finer points of logical argument. But a more storytelling culture could take larger chunks and perhaps would find narrative more compelling. A culture that defines itself through song, such as the Dinka people, might find the Bible’s poetry more powerful.

Laura over at Many Things has been reading about how things like selfhood and individual decision feature in the ‘evangelical gospel’ because those were key concerns at the time of the evangelical revivals. But are they essential, especially in a corporate culture? Might there be other themes or categories that are more appropriately prominent?

Even within ‘message’, there are layers to consider: motivation and perception are incredibly cultural things. Tell a Tanzanian they can be ‘saved from their sins’ and they might not care a whole heap; tell them ‘be saved from poverty’ and you’ve got their attention!