1. A spare tyre on the back of the car can save the day. We got rear-ended by a van while stuck in traffic, however there was no harm to our car (or us) because the impact was cushioned by the spare tyre.

2. Maps are no one’s friend. The one we had wasn’t accurate and none of the Tanzanians we met were familiar with the concept of viewing their own city on a map anyway.

3. Remove or tuck in your wing mirrors when in the city. Apparently it’s not uncommon for mirrors to be ripped off, but we were only warned about it when we were already a mirror down. Ours was nicked from our moving car as we tried to enter a roundabout.

4. There are no street signs. Anywhere. Even for major roads. Use landmarks and get a compass.

5. A sense of humour is mandatory. Fortunately, there is plenty of fodder.

If you can’t read the words, the dripping blood font says it all! 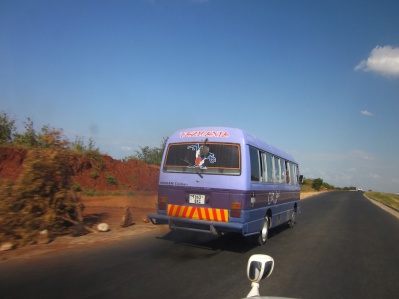