Getting my head around perceptions of breastfeeding in Tanzania

President Magufuli’s reasoning against pregnant girls returning to secondary school was that they would be distracted from their studies by breastfeeding their babies.

I found this somewhat surprising, because a friend of mine in Dodoma had told me about how at her workplace, breastfeeding women are given regular breaks to breastfeed their babies, should they be brought into them by their nannies, and showed me the piece of legislation protecting this right. Another friend is even permitted to return home to do it twice a day. (She lives close to her workplace though.)

But then, this does not seem to be uniformly known or practiced across workplaces in Tanzania. (Confusion and misinformation about women and the law is not unheard of.) One friend who is a teacher told me how full and painful her breasts are when she returns home at the end of the day after being away from her 3 month old, and how the first thing she does is to get her baby on the boob. During the day the baby has formula. Another friend who works in business will express (pump) milk for her baby ahead of time. Both these women said that it was felt by their workplaces that breastfeeding a child would be seen as a distraction from work, much like what President Magufuli said.

I was then surprised again to see in the newspaper a story about how a breastfeeding room has been introduced at Tanzania’s parliament, supported across the party spectrum. A friend confirmed for me that this is indeed a political statement, a way of parliamentarians expressing their disagreement with Magufuli’s pregnant schoolgirl ban. Breastfeeding is not a distraction! 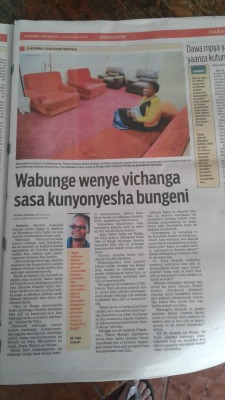 The newspaper article cast the breastfeeding rooms as a modern standard, and this was interesting to me again. Breastfeeding in Tanzania has suffered from the perception that it is backward. As my friend said, you can breastfeed in the village or at the market, but not at the office; it’s thought to be incompatible with sophisticated modern ways of life. And yet, President Magufuli’s ban has been roundly condemned as hindering the education of girls, which recasts allowing mothers to breastfeed at school (or work) as a development issue, and one of gender justice. In other words, allowing breastfeeding in the workplace is precisely what modern progressive societies do.

So it’s not been surprising to also see media coverage of Larissa Waters breastfeeding in the Australian parliament. Someone asked me about it this weekend, and what Australian perceptions of breastfeeding are, but I had to say that they are just as complicated and loaded as Tanzanian ones!