The contention of the ‘Why men hate going to church’ movement is that church has become feminised. From David Murrow’s website:

Modern day church activities are ‘an emotional hothouse’ and focus on being ‘verbal, studious or sensitive’, none of which are ‘natural for men‘.  You’d hardly call this science – even social science is a stretch – but much of it seems to resonate with men and so Murrow gives some suggestions for manly church. Laying on hands during prayer is a no-go: men need their space. And you need songs which are about ‘doing’ rather than about intimacy.

Here’s the thing though: neither physical contact nor intimacy are ‘feminine’ in all cultures. For example, Tanzanian men LOVE physical contact, including with other men. (Actually, so did western men not too long ago!)  Also, they spontaneously sing, including love songs to Jesus, not just in church but even walking along the street!

Are Tanzanian men just less riddled with testosterone? Or are these propositions about men in church more cultural than innate?

I don’t want to invalidate the feelings many western men have about church. They may well be legitimate grievances within their particular cultural context.

But let me add another layer of complexity.

Despite the fact that church-type activities are not considered feminine in Tanzanian culture, men are still a missing demographic at our church in Dodoma. Men lead the church but women far outnumber men in the congregation. I don’t pretend to have anywhere near enough the cultural insight to suggest why yet. (Perhaps there are other elements of feminisation that I do not see yet!) 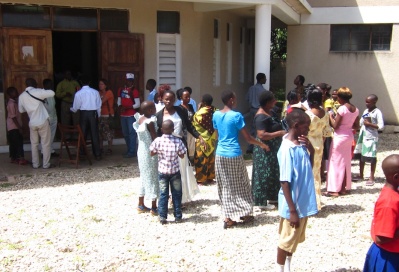 If we expect that Jesus gathers his followers from among the powerless, shouldn’t we expect there to be more women than men in church?

I’m not suggesting that women are the only powerless people in the world (hello, racial minorities, the mentally ill, the unemployed, etc.) but that because women are one oppressed people group, it ought not to surprise us that stacks of them end up in church.

Even in the west, where women tend to have more economic freedom than their majority world counterparts, they experience bondage in the constant public policing and criticism of their bodies, parenting, career, personalities, etc. For all the talk about men’s disenfranchisement in the church, they do not experience the same level of sexism or scrutiny that women do in society at large. Men still play the game of life on easy mode.

It may be that the church needs to do some long hard thinking about how to engage men in church, but that may have less to do with men being the victims of a feminised church and more to do with them being the ‘powerful’ in our wider society.

This is just a hypothesis – I have no idea how to test it (nor desire to do so). But with the ‘men hate church’ concept well worn and seemingly obvious in the western context, might it be worth considering? What do you think?