Strategies for self-esteem and belonging for TCKs (and other kids)

As our family has been through the wringer these past several months, with more to come, our little guys have been searching for stability. Now we are back in Dar, some of that has settled down, so I have been seeking to build up their emotional resilience. I’m sharing some strategies I’ve been using here because they’re about story, belonging and self-esteem which all kids need, even if their lives are less tumultuous than our kids’ lives!

We draw pictures of our family, included in the love of the Trinity, with the idea that wherever we are, these two things are constant. So when we say goodbye at school or at home we say, “I love you and God is with you.” We’ve built on those icons to draw our way through difficult transitions, like pictures of starting at new school, or going on planes to and from Australia. 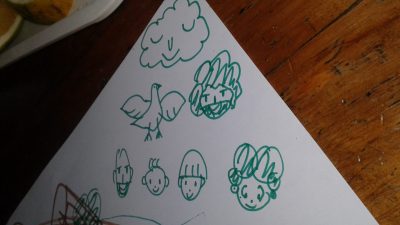 We draw and narrate Elliot’s life story, as a way of helping Elliot to work out the sequence of events and where everything fits so that he can feel a sense of familiarity and control. And what kid doesn’t love hearing about themselves?! Often he’ll just ask for it as we drive along in the car! For his fifth birthday, I had a number of photos from his life printed in A4 and we stuck them on the wall as something of a timeline. Three months later, Elliot still shows it to every visitor who comes to the house.

Elliot has also wanted to hear stories of my childhood, and of Arthur and my life together before he came along. I think these stories ground him, acting as an anchor in the upheaval and unpredictability. They help him to know ‘his people’ and where he comes from, to feel part of a larger whole, and secure in that. Elliot can now tell about Lockery family holidays in a caravan at the beach; the time Red Twin broke her arm playing gymnastics in the backyard; how awful it was when Jessie got her beautiful golden curls tangled in the monkey bars and hung suspended by them; the time there was a snake under the house and Pop set fire to its hole then flooded it with water; how Anna Louise got her name; who the Thumpkins (our childhood bogeymen) were and how we defeated them, etc. 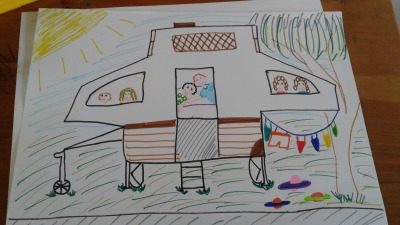 Sometimes he likes to insert himself into the story, as below, where he, Callum and their cousins join the four sisters in the backyard. My sister Jess says this is a picture of what Heaven is like, reunited with those we love through time. 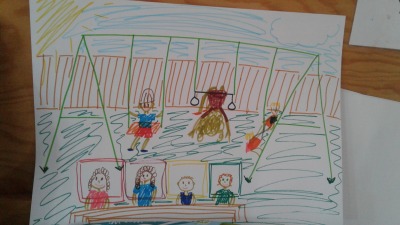 I’ve also worked with him on who he is as an individual. We have really appreciated the focus on self-esteem in the Tracie Moroney feelings books, and I felt that Elliot needed positive things to say about himself. I drew a dot-to-dot which he traced to make his shape, then we stuck on a word about him each day. I pre-wrote the descriptions using this list for ideas. I wanted all the words to be true and recognisable of him, so they couldn’t be aspirational. He now references these labels in his daily actions. 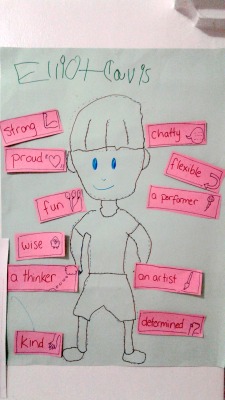 While I was on a roll, I made a similar activity to highlight the ways we show we love him. In truth I came up with this idea because “you don’t love me” was being thrown at us as a weapon. I wanted to counter the negativity of that narrative, and I also wanted to highlight just how outrageous it is. Like the self-esteem activity, these cards have given him language to identify how enveloped in love he is in big and small ways, and that has actually resulted in some degree of thankfulness. We haven’t put all the cards on this one yet. Some of them are pretty general e.g. ‘give you good nutritious food’, ‘pray with and for you’, and some are highly specific to him e.g. ‘do “imagines”‘ (meditation/relaxation/visualisation exercise before bed), ‘bike riding games on the roof’.