There’s a reason we can’t find a house, and it’s to do with the garden…

We had three friends – a Kenyan, a Ugandan and a Tanzanian – come into our house for a visit and they were amazed at the children’s books on the coffee table, the basket of toys in the living room, and the posters around the house of daily routines, calm down activities, and self-esteem boosters. In East Africa (and, perhaps in Australia in a by-gone era), visitors are normally taken to the special visitors’ room, which is not child-friendly. We have no such room, because our children are integrated into our life. I said to our friends, ‘This is our children’s house too! We want to be hospitable to them, and for them to feel like it is home.’ They thought that was novel, and wonderful.

While we’ve been house hunting, I’ve been seeing how houses reflect our cultural expectations. (Sweeping generalisations ahead.) Our biggest requirement has been a shady garden that the boys can play in. Yet, many Dar es Salaam homes are surrounded by huge paved courtyards. They may have a garden, but it is manicured – not for playing in. Or it’s a shamba – a small family farm. If they have trees, they are normally small, and the shade they provide is for someone who will sit still in the one place, not for someone running around. In other words, they’re not that great for active kids! 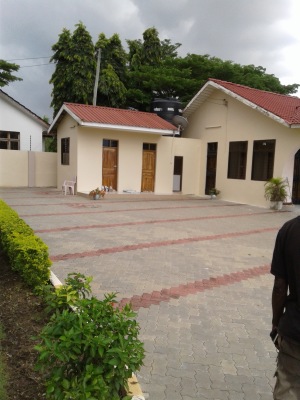 One of the houses we were shown. Pretty typical of what we are seeing, though less palatial than some!

Perhaps Dar kids are just tougher than mine, and will play in the full sun in the height of the tropical summer (which lasts 9 months), so shade, grass and garden are less of a priority. However, generally urban Tanzanian kids are not encouraged to be active in the same way that Australian kids are, and Tanzanians feel very concerned about them playing in dirt. My hunch is that there is an anxiety about this being primitive in some way, and related to a horror of having any dirt on one’s clothes because that is unhygienic.

It seems to me that the space reflects the cultural expectations, that the needs of children for play are little considered, and good children keep out of sight. Now, kids need to play – they’ll play anywhere! My point is not that Tanzanian kids don’t play (though I could write another blog post on how their play differs from my kids’ at least), but that the space is not set up to enable their play. A child may have a bike, but a cubby or a trampoline is much harder to come by.

Because, the space has other functions and purposes. One is displaying wealth and status. Another is taming the environment, consciously moving away from the supposed primitivism of wildness and nature.

But all this means the garden good for kids that we are looking for is quite elusive, at least at this point! Well, that’s one reason for the difficulty of the house hunt, anyway!