For a start, he’s gorgeous – at one point, he wears his shirt open and Bella (the protagonist) notices his finely muscled body for the first time, because up to that point (and she’s known him for some weeks) she’s been totally mesmerized by his beautiful face. So he’s the full package physically.

Despite his undeniable masculinity, Edward is completely non-threatening sexually. Sure, he’s strong and takes control of a situation, even incapacitating Bella by sweeping her effortlessly into his arms when she’s not co-operating, but this is never expressed sexually. He holds her, even in her bed as she falls asleep, but this never progresses into sexual advances. Edward’s not even sure that sex is possible for them. So he is safe.

That’s not to say that he’s perfect. If that were so, I doubt he would be a very believable or attractive hero. There’s something very real about Edward – he gets angry with Bella, he scowls at her, he withdraws from her. They fight and joke and use sarcasm and hurt each other. But he is constant in his love for her. He loves her despite the disapproval of some family members. He defends her honor and he is jealous of those he sees as a threat to Bella or to his relationship with her. He is a true hero, defending his maid.

I think perhaps the most thrilling thing about Edward, though, is that he exercises incredible self-control out of his love for Bella. The conundrum of their relationship is that part of Bella’s allure for Edward is that she smells so delicious – quite literally! So much of the first half of the book is about Edward learning to be with Bella as he fights the urge to drink her blood. There is an incredible inner turmoil as he fights his own desires, putting his own needs away for the sake of loving her. It’s a full on war but he’s willing to fight it. She’s worth it!

And I think that this is where the novel hangs together and drives at the great longing of teenage girls and young women. Bella considers herself very ordinary looking, unco-ordinated, uninteresting. But to Edward, she is the most beautiful, compelling, exciting creature he has ever known and he desires her more than anything else. What woman doesn’t identify with a desire to be loved like that! 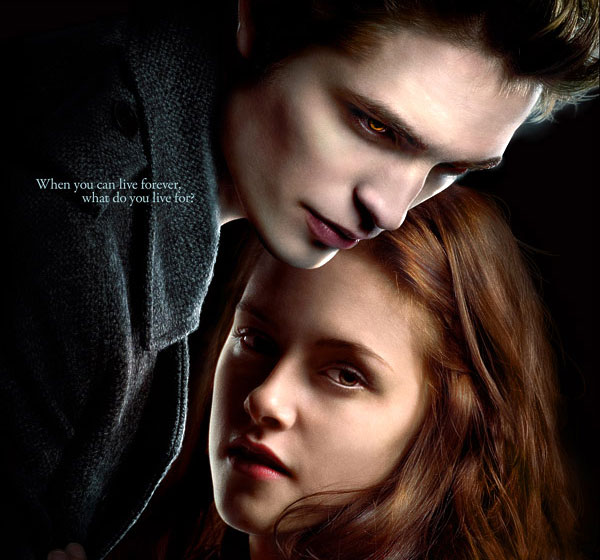 Of course Twilight is fantasy, and I’d be the first to defend the unreal elements of the genre, just as I take exception to conservatives who rail against the immoralities of the romantic comedy genre. But in some ways I wonder whether I’d be more comfortable with Twilight, the movie. I haven’t seen it, but I assume that like most movie adaptations it loses something of the intimacy a novel offers, where the reader is drawn into each moment, each thought, each heartbeat. And I suspect that Edward Cullen is a far more powerful character than whichever cardboard cut out Hugh Grant chooses to play next. This is a character who has captured the hearts, minds and imaginations of women, the man they wish their husbands / boyfriends / future husbands were like.

When I was reflecting with Arthur about this he mused that perhaps men should read Twilight to get some insight into what women want. I read him a page and he admitted he’d never get through the saccharine of the first chapter! Although I still don’t think it’s a bad idea. After all, I hear a great deal of talk about how a woman ought to entice her husband visually and this may well be the equivalent.

But in the same way that male temptation to porn is condemned for its destructive impact on men, women and marriages, I wonder whether we women need to take a long hard look at how we too ruin our expectations of ourselves, men and marriage by what we feed our minds. Edward Cullen may be amazing but he will never materialise. And though we may love him, he is not the one any of us have been given to love. And not only do we run the risk (either now or in the future, depending on our marital status) of becoming resentful of our husband, we also make our own task of loving him that much harder by comparing him to an impossible ideal. I wonder whether we actually have something to learn from Edward Cullen – to love that which is sometimes ordinary and to take great delight in doing so.